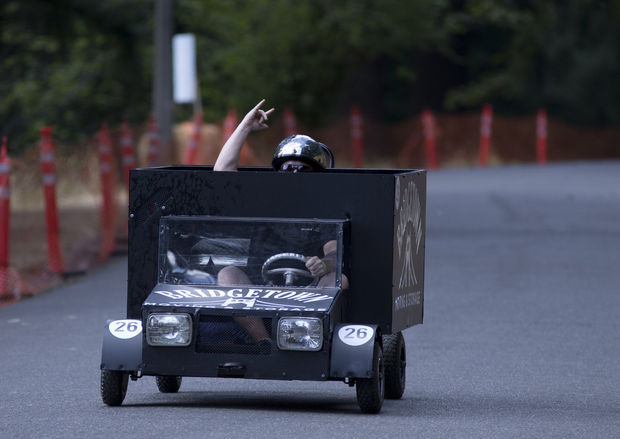 The PDX Adult Soapbox Derby is the perfect event for those looking to have a some fun in a unique way. Since 1997, spectators and participants alike have gathered at Mt Tabor Park to be a part of the annual event where homemade soapbox cars race down the hill to the cheers of the crowd. It’s a blast for everyone involved and I was so glad to be able to join the fun this year with the rest of the Bridgetown crew.

In true Portland fashion, the derby is less about winning and more about spending time together as a community and sharing your creativity and design with others. Some contestants strive for speed while others attempt to construct the most whimsical car they can dream up. Either way, everyone finishes the race with a smile on their face and in time to join festivities happening on the sidelines, which include food carts, beverages, and conversation. This year, there was no need for the fun to end after the race was over, so many of those who attended headed to the after party sponsored by White Owl Social Club, a local neighborhood hangout.

Over the years, Bridgetown Moving has been focused on providing Portland and the surrounding area with exceptional moving and packing services. As a local company, we are also committed to fully involving our team members into the welcoming community that our city is known for. This year, we knew we wanted to be a part of the action and Bridgetown Moving was not only one the Derby’s sponsors- a member of our team even joined the race. Sam, one of our office coordinators, worked with the team to create a smaller version of our signature black and white logo-ed trucks. Our movers wrapped him up in protective bubble wrap before we sent him zipping down the hill. Don’t worry, our movers don’t drive the real trucks quite that fast!

The team at Bridgetown Moving & Storage are always looking for new ways to share their love of the Portland community. I hope you saw me walking around the sidelines handing out Bridgetown Moving beer coozies and that you think of us next time you need to set up a local move.